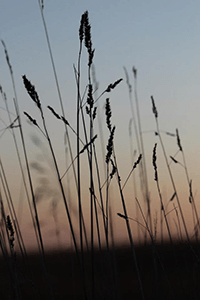 Blue Grass is a friendly Iowa farming community located on Highway 61 approximately ten miles southwest of Davenport, in the southwest corner of Scott County. Originally platted in 1853 with an approximate population of 100, it has grown to a comfortable community of 1,200 plus, with an increase expected from the Census 2000.

The site of Blue Grass was originally on an Indian trail between the Mississippi River and the Cedar River. This area was the Indians’ choice for their camping site, and over the years as they and their ponies trampled the taller grass, they noticed that the newer grass which sprouted up had a bluish tint (similar to Kentucky blue grass). This area became known as Blue Grass Point. Settlers began arriving in this area around 1836 and soon built log cabins and farmed the rich soil, which sold for about $1.25 an acre. Some of the earlier settlers were: in 1836 - Abel Sprague, Andrew W. Campbell, James Grant and William Lingo; in 1837 - Joseph Wallack, Samuel Lettle, Frank Lettle and Henry Gabbert; in 1838 - John F. Fry, Robert Wilson, Peter Wilson, Ben Johnson and John Henry Schuett; in 1839 - Rufus Catlin, Joseph Mounts, Robert Humphry, Henry Lewis, Theodore Hartwell, George Metteer and Charles Metteer.

In 1853, the village of Blue Grass was platted out by J.E. Burnside, John Perrin and James Reynolds. It is believed that the streets were named after the wives of the founding fathers of Blue Grass. Some of the street names have unusual spellings, whether intentional or originally misspelled. They are still used today - for example: Mayne (Main) Street, Juniata (Juanita) Street.

In 1854, J.E. Burnside published the following announcement to promote growth in this newfound community. “This town is situated on a beautiful undulating prairie, ten miles from Davenport and eighteen miles from Muscatine, on a state road five miles from the Mississippi and Missouri Railroad and three miles from the river. It has a very healthy population of one hundred, not a case of sickness having occurred this summer. It is within a half-mile of timber and same distance from the best coal banks in the county. It is well watered by both spring and creek. A saw mill and grist mill are in operation 3-1/2 miles from town.”

In 1903, the town was incorporated. After a fire in August of that year, the need for fire equipment became very evident. To obtain the needed money by taxation, the town had to be incorporated. With the incorporation came the first of twenty mayors, H.F. Wunder.

How Blue Grass Got Its Name

According to Blue Grass history, the name of the town originated from a point on a much-traveled Indian trail leading from Davenport to Moscow, and the Cedar River passed by a point of timber on Section 31 in Blue Grass township. This point was a favorite camping ground of the Indians. In time, the prairie grass was trampled down and destroyed by them. In its place sprung up a bluish green grass resembling the famous blue grass of Kentucky. The camping place became known as Blue Grass Point. The township originated, as did the town, being given the name “Blue Grass” when the post office was established in 1840.